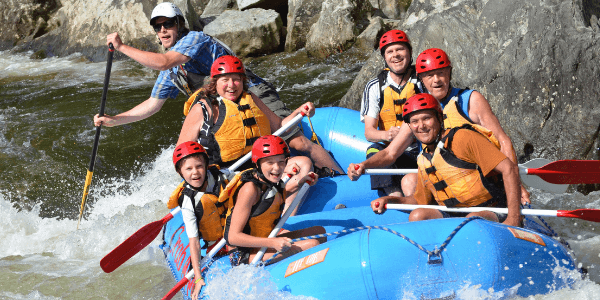 How Inflatable Whitewater Rafts “Self Bail”

How Inflatable Whitewater Rafts “Self Bail”

Guests often ask how the water leaves the boat in a “self bailing” raft. Many rafters assume there is some type of a electric bilge in the rafts, but it so much simpler than that. Self-bailing rafts were introduced in the early 1990’s and have become the industry standard. In both Maine and Massachusetts, Crab Apple Whitewater uses Hyside and Northwest River Supply self-bailing whitewater rafts and inflatable kayaks.

Prior to the 1990’s, inflatable whitewater rafts had a floor that was simply an attached piece of raft fabric that essentially kept passengers from falling through the bottom of the boat. It was flexible, pliable and caught all of the water that flowed over the side of the raft from the rapids and waves. As the raft filled with water it became extremely heavy. In addition, as the whitewater raft filled with water, the floor would stretch a bit under the weight of the water and raft passengers could lose their foot placement that was helping to keep them stable in the raft. In larger and longer rapids, rafts would fill completely to the top and water would literally be flowing in and out of the raft with each wave and surge. The extra weight in the raft made maneuvering extremely difficult and added danger in fast moving rapids and rapids that required precise maneuvering around exposed rocks. After each rapid, rafts had to pull to shore and remove the water using buckets – the guide usually worked one bucket by themselves and guests took turns with a second bucket until the raft was emptied. One by-product of bailing the rafts were incredible “splash wars” amongst the rafters.

The self bailing raft is truly a simple design. Instead of a single piece of fabric holding the water in place, the floor inflates and creates a rigid surface (like an air mattress). There is several inches of extra fabric left around the outside of the inflated floor. A series of holes are punched through the extra fabric where it attaches to the outside raft tubes. The holes sit several inches below the level of the top of the inflated floor. As the water enters the raft it immediately flows off the top of the inflated floor and down through the drain holes. After going through a large rapid or feature on a whitewater rafting trip, the raft will take on lots of water but is able to drain in just seconds.

In addition to quickly draining the water from whitewater rafts, the new self-bailing floors provides other positive features.The rigid, inflated floor provides additional stability for rafts to push through large whitewater holes and waves when compared to the pliable, softer non-bailing floor which often twisted and bent in large whitewater features and sometimes led to passengers losing their balance and falling overboard. Another huge benefit of self-bailing whitewater rafts is that in the early Spring each rafter’s feet are not constantly submerged in cold water. This allows ample opportunity for rewarming in between rapids. In the Springtime before whitewater outfitters used self-bailing rafts, each rafter’s feet was sitting in the cold water that had collected in the bottom of the rafts for the entire trip. Rafts were bailed out, but there was always a little bit of water left to keep the toes icy cold. With the advent of self-bailing rafts, all of the water drains and raft passengers can keep their feet out of standing water except during the rapids.