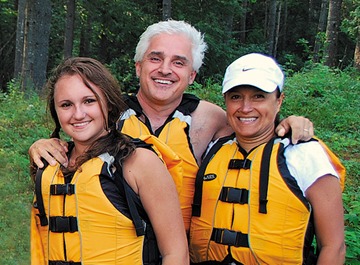 Crab Apple Whitewater was founded by Chuck and Sharyn Peabody in 1983. The Peabody’s first left Hingham on the south shore of Boston to find adventure in Maine in 1981. Chuck left steady work as a foreman in a rubber factory in Brockton and Sharyn gave up homemaking to relocate in The Forks. In tow were Jennifer (9) and Robert (5). They purchased Crab Apple Acres Inn and half of the Inn became the family home and half remained guest rooms for fishermen, hunters and local workers.

Life in The Forks was different from Hingham. No more suburban neighborhood with lots of other families and modern conveniences. Sharyn went back to her Maine roots and cooked with a wood stove and did laundry with a ringer- washer. No television was available for Chuck, an avid Boston sports enthusiast. It was like stepping back in time.

Chuck taught school in Jackman for two years while the inn was often full with adventurers and workers. Sharyn got up at 4am to feed hungry hunters in the fall. Three meals were provided to mining employees looking for rich minerals in central Maine.

Jennifer and Robert attended the one room school house in The Forks.

In the spring of 1983 Chuck paid another whitewater rafting guide to teach him how to guide rafts down the Kennebec River. He had never been in a raft and had no idea what to expect. Many days during his training he returned home to tell his kids that he had fallen out of the raft that day and swam through “Magic Falls” Rapid once again. Finally, when the training was done Chuck got his whitewater rafting guide license from the state of Maine and Crab Apple Whitewater was born.

Crab Apple began with lodging at the Inn plus two used rafts, an old van and a garage that doubled for gear storage and photo viewing after a raft trip. Seating for the slide show came in the form of bench seats ripped out of the old van that transported the rafts to the river before trips.

A Family of Whitewater Rafting Guides

Since 1983, the Crab Apple family has grown along with Crab Apple Whitewater. Jennifer and Robert both entered the family business along with their spouses. Jennifer went off to open a new operation in the Berkshires of western Massachusetts in 1989.

Now the third generation of whitewater rafting guides are working at Crab Apple. Grandkids work as photographer, guide and younger ones are general helpers at the base lodges in both Maine and Massachusetts.

Crab Apple has grown from humble beginnings to become the largest rafting outfitter in New England. Comfortable base camps along the Kennebec River in Maine and the Deerfield River in Massachusetts are the flagships of an operation whose whitewater rafting guides take about 25,000 people down the river each season.